Dr. Condon is a native Californian who has provided podiatric care to the North Lake Tahoe and Truckee Area since 1993. He first became interested in lower extremity biomechanics and anatomical structure vs. function relationships during his undergraduate degree at UC Davis, where he majored in Physical Education with an emphasis in Exercise Physiology. He followed his thirst of biomechanics and enrolled in CCPM, (California College of Podiatric Medicine), then a hot bed for lower extremity biomechanical theory. He graduated from CCPM in 1985 and then successfully completed his surgical residency in Santa Ana, California, in 1985. Recognizing that a comprehensive understanding of sports medicine cannot be narrowly focused on the lower extremity, he successfully completed The American College of Sports Medicine Team Physician Courses, Part I and II. 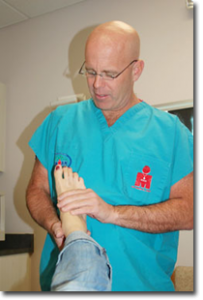 His undergraduate and five years of post graduate education combined with his athletic experience as a competitive tennis player, triathlete, and skier (telemark, downhill and XC) provide him a unique perspective in treating lower extremity sports medicine injuries. In 1993, he decided to move to Truckee to embed himself in a community that shares his passion for an outdoors, active lifestyle.

He has provided a full spectrum of care to the community including his passion of podiatric sports medicine and biomechanical treatment with functional custom orthotic devices, office- and hospital-based surgery, and general foot care with special attention to the needs of the elderly and diabetics. He is double boarded in podiatric surgery and podiatric medicine from the American College of Medical Specialties in Podiatry. He was the first active podiatrist on surgical staff at Tahoe Forest Hospital and Incline Village Community. He retains those privileges as well as surgical privileges at Truckee Surgery Center. He holds Nevada and California licenses to practice podiatry.

His slogan, “Healthy Feet for an Active World ” represents the importance of leading an active lifestyle for one’s general well-being, as well as allowing the pursuit of any activity-driven passion. Whether you enjoy dog walking, a hard game of tennis or are an Ironman Triathlon, Dr. Condon can keep your feet in tip-top shape and get you back in the action.

David E. Condon, DPM is licensed in both California and Nevada, and is a staff surgeon at Tahoe Forest Hospital, Incline Village Community Hospital and Truckee Surgery Center.

“Dr. Condon performed a small miracle on my foot 17 years ago. Since then and countless marathons and several ultramarathons later, my feet continue to be pain free and I am able to do anything sport-related with ease.” ~ Natalie